Deprecated function: The each() function is deprecated. This message will be suppressed on further calls in menu_set_active_trail() (line 2405 of /home/kayungago/public_html/includes/menu.inc). 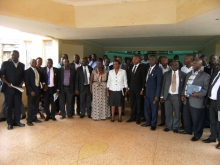 A site meeting for the Renovation and expansion of Kayunga hospital has taken place at the hospital site. It started with a tour of the projects being worked on like the lagoon, , main administration block, theatre, private wards and staff quarters being renovated & newly constructed.
According to the report from the contractors , completed works was at 84.60% and anticipate to complete the project in February 2020.

Very soon block K1A & K1B will be handed over for use on Oder to pave for the renovation of the OPD and antenatal .

Agriculture is the main economic activity in Kayunga district and represents 90% of the total employment. Kayunga practices mainly 2 types of agriculture that is animal husbandry or livestock farming and crop husbandry. The good climate, fertile soils, rainfall which peaks in March-May and October-November and huge lands makes agriculture one of the best alternatives for the population Kayunga district. 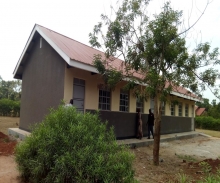 To enroll and retain all school going age children in schools in Kayunga District throughout the given education cycles.